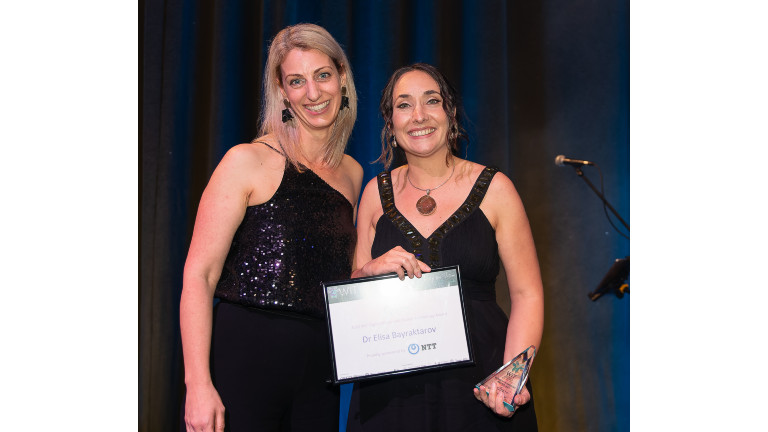 EcoCommons Australia is proud to announce that our Program Manager, Dr Elisa Bayraktarov, has won the Digital Mover and Shaker Award at the 2022 Women in Technology (WiT) Awards Gala in Queensland.

The awards are one of the biggest and longest-running recognition programs for women in STEM and Technology in Australia and this year’s competition attracted a record 500 nominations across 14 award categories.

Elisa was presented with the Digital Mover and Shaker Award – which is given to a rising female Technologist growing in their career making a significant contribution to the growth and development of their teams and organisation – in Brisbane on 16 September.

She impressed the judges with her experience in her role as Program Manager at EcoCommons where she works at the interface between science and digital innovation and specialises in building virtual laboratories for the environment.

Elisa leads a team of 10 agile software developers, scientists, science communicators, trainers, and data analysts to build EcoCommons which will become the platform of choice for environmental problem solving.

Elisa has also championed the development of Australia’s Threatened Species Index which has become a national statistic to report on changes in threatened species trends and was used in the recent State of the Environment Report 2021.

She said: “I am delighted to win this award and am thrilled to be recognised for delivering science and tech that is having real-world impact for the environment.”

She added: “EcoCommons will empower researchers and policy-decision makers to protect and restore the planet by providing ecological data, robust scientific workflows, and a flexible digital research infrastructure.”

In addition to her work on EcoCommons, Elisa is a conservation scientist who mobilises and interrogates data to craft solutions to environmental problems. She is an expert in producing trends to report on the state of Australia’s threatened birds, mammals, and plants, and on how we can optimise the restoration of our marine and coastal ecosystems to be more affordable and successful.

“We’ve created an opportunity to rally around our outstanding talent, unlock their potential, promote each other and ourselves – impacting our community in a way that creates positivity beyond the event itself,” she said.

Read more about Elisa and the other winners on the WiT website.

Join us for the public launch of EcoCommons on 29 November.