Open EcoAcoustics has a vision to “enable open science and conservation through the development and promotion of open access ecoacoustics technologies, methodologies and standards”. Biodiversity inventories and monitoring in Australia are difficult due to the vast areas of remote areas few people visit which are confounded by some species which are exceedingly difficult to detect. Imagine a 10 to 20 fold decrease in the time required in the field to generate verifiable occurrence data for species which vocalise, perhaps only occasionally. While this is clearly a huge challenge, the tools being developed by QUT and the stakeholders involved in Open EcoAcoustics are demonstrating how this can be achieved. Below we highlight how ecoacoustics data can be used in generalised dissimilarity modelling, a workflow coming to soo to EcoCommons dashboard tools. 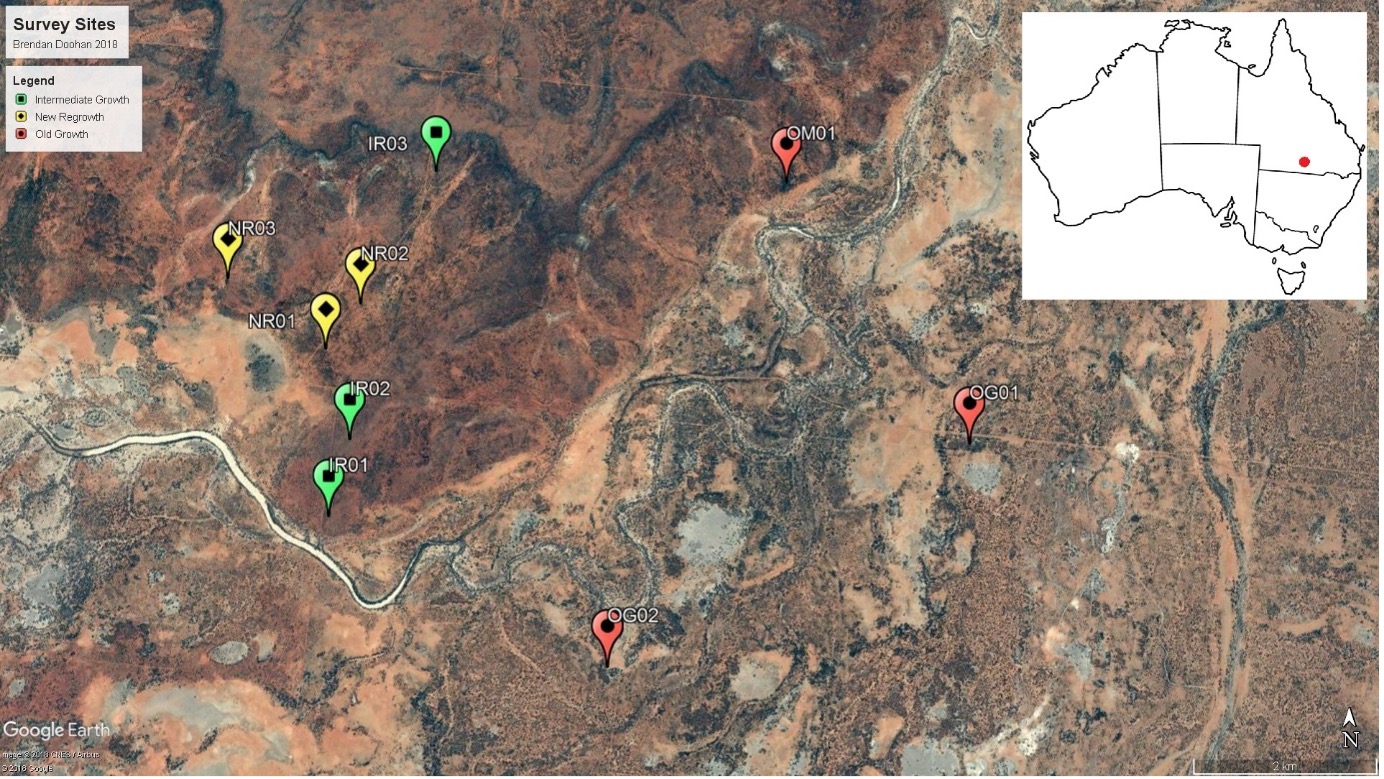 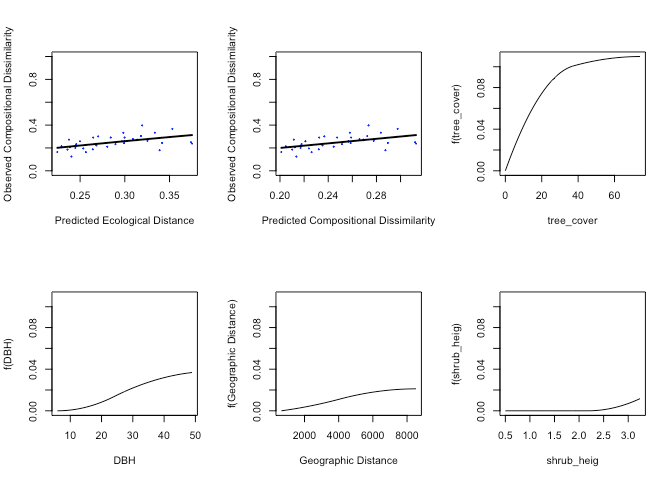 Understanding changes in species composition across temporal and spatial scales can provide important insights for the management and conservation of biodiversity, particularly with increasing threats due to climate change and land clearing. Traditionally, species community surveys, performed with consistent methodology, are used to model compositional dissimilarity. However, the aim of this project was to demonstrate how data collected by passive acoustic monitoring (PAM) may also be used to examine spatial variation in species composition across a landscape.

This case study uses annotated acoustic data from a previously published study (Doohan et al. 2019), to demonstrate how acoustic data, and the analytical tools coming soon to EcoCommons (an R package to help you understand how to set up a GDM model is now available), can be used to model changes in avian species composition within the Mulga Lands bioregion of Queensland. The advantages of PAM include reduced observer bias, consistency in survey effort, and is feasibly scalable across both time and space.

Generalised Dissimilarity Modelling will be coming soon to EcoCommons, and if you want to get familiar with the way to set up a GDM, please check out the new GDM package developed by Peter Wilson, Linda Beaumont, and Jess Fenker Antunes.

Faunal biodiversity is known to be influenced by vegetation condition, structure and diversity. Given the history and extent of vegetation clearing across Australia, it is essential that the relationships between vegetation and faunal biodiversity are understood. The Mulga Lands bioregion, which stretches from south western Queensland into northern New South Wales, is one such area that has experienced high levels of vegetation clearance. This region provides a unique habitat for many arid, semi-arid and temperate species. However, the effects of regrowth vegetation on community composition is poorly understood, particularly in semi-arid and arid environments. Birds are often sensitive to the effects of landscape modification and clearing, and therefore represent good candidate species to study the effects of regrowth vegetation. As a result, avian biodiversity was examined in the Mulga Lands bioregion, in relation to various stages of vegetation growth.

This research involved the use of passive acoustic monitoring devices, which can capture large scale datasets on environmental soundscapes. Analysis of those soundscapes represents the focus of the emerging field of ecoacoustics. The increasing use of passive acoustic monitoring represents an ever-growing body of data which can be harnessed to answer an array of ecological questions (e.g. A2O, ecosounds etc). We therefore intend to demonstrate how this data is also an ideal candidate to be used to examine compositional turnover of species across various spatial scales, which has traditionally been performed with presence absence field survey data. The advantage of this workflow is being able to leverage existing acoustic datasets that may already contain species annotations. This data, accompanied by either study site survey data, or remote sensing spatial layers, will be able to provide key insights into environmental predictors of biological diversity across various spatial and temporal scales.

The data used in this case study consisted of avian species identifications from acoustic recordings obtained from a previous study undertaken by Doohan et al. 2019. Their study took place in the Bowra Wildlife Sanctuary, an Australian Wildlife Conservancy property approximately 850km west of Brisbane, Australia. The data came from nine study sites in total, which were classified based on their time since clearing occurred, representing three regrowth sites (cleared within the last 15 years; site code NR), three intermediate regrowth sites (cleared between 15 and 30 years; site code IR) and three old growth sites (no clearing events within the last 30 years; site code OG and OM)(Figure 9). One acoustic monitoring device was deployed at each site (model SM3; Wildlife Acoustics), and set to record the dawn chorus each day continuously for 3 hours (recorded as WAV format, in mono at a sample rate of 22,050 Hz) during the study period of 28 days (29th August 2017 – 25th September 2017). From this data, 45 hours of audio were processed by Doohan et al. (2019) using a stratified hierarchical approach, representing 15 randomly selected days, and all bird species were manually identified from their calls and annotated on the Ecosounds website (https://www.ecosounds.org/ project “Cunnamulla”).

For the current project, we demonstrate how an existing annotated acoustic dataset, along with study site environmental data, can be used to model compositional dissimilarity of avian species in relation to various environmental predictors. Therefore, a generalised dissimilarity model (GDM) approach was chosen. The benefit of this method is that it can statistically relate beta diversity to environmental gradients, while accounting for two important nonlinearities present in more traditional ecological methods (see Ferrier et al., 2007).

Using the GDM package in R (function: GDM with default parameters), a model was fit using a range of environmental variables that were collected in the field at the location of each acoustic sensor. Vegetation assessments were undertaken by Doohan et al. (2019) in March 2018, using the line intercept method.

The final variables included in the model were:

The model had a percent deviance explained of 27.159, representing the variation in observed dissimilarities explained by the model. A slight positive linear relationship was seen, whereby as the predicted ecological distance between sites increased (predictors), so too did observed compositional dissimilarity (Figure 2). Of the environmental predictors, the sum of I-spline coefficients was highest for the predictor value tree cover, indicating the greatest effect on compositional dissimilarity. It was seen by the gradient of the slope that changes between 0 to 30% tree cover resulted in the greatest changes in predicted dissimilarity between study site pairs (Figure 10). However, a permutation assessment showed that the model was not statistically significant (p = 0.370). The intercept of the model was 0.206, which represents the expected dissimilarity between sites when the environmental predictors are equal.

These results successfully demonstrate a simple workflow in which acoustic datasets can be leveraged to provide insight into patterns of biodiversity change relative to environmental predictors. In this case, the original sampling design could have limited the model’s ability to predict changes in composition throughout the landscape relative to the environmental predictors. For example, all sensors were located inside a patch of vegetation at least 150 m or greater in diameter. The total number of sample sites was also small, and sensors were positioned across a relatively small spatial. Nevertheless, this is a great example workflow of how annotated acoustic data can be used to perform more robust modelling methods, such as GDM.

In this example, study site vegetation survey data was available at the location of each recorder. However, it is also possible to use spatially complete gridded environmental data with the GDM package, such as remotely sensed data in raster format. This allows projection of the model across the spatial grid, to map predicted patterns of dissimilarity.

With the growing body of acoustic data, coupled with remotely sensed data or ground-survey metadata, it will be possible to examine patterns of biodiversity variation across large spatial and temporal scales. Identifying environmental factors that are important drivers for species occurrences can help to guide land management and landscape rehabilitation / restoration guidelines etc. Can also make predictions about compositional turnover related to changes in environmental conditions, such as land cover, or temperature (climate change).